The beginning of 2021 signaled the start of the new decade and also welcomed a milestone in the world of manga.

Open to all One Piece fans, the World Top 100 is a free global popularity survey that will determine who is the most well-loved OP character, ranking the Top 100 out of the 1,1174 persons to ever grace the comic book series. 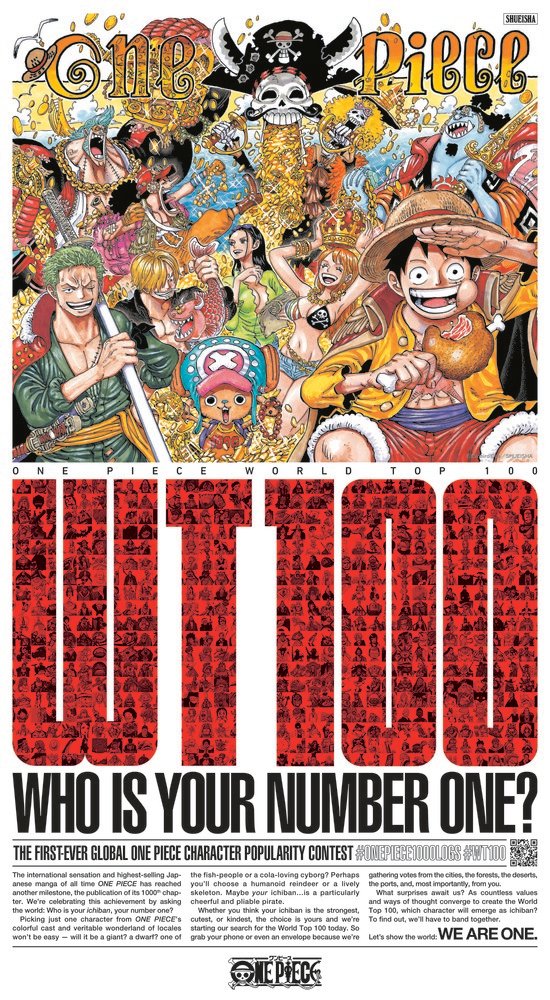 There's even a full-page ad about it in the New York Times.

The website for the poll has just opened and it allows participants to vote for their favorite character once per day until Feb. 28, 2021.

Participants can receive an AR (augmented reality) model of the series' most popular characters. Different models will be added throughout the poll's two-month run.

Here are the mechanics:

Alongside the global release of One Piece’s 1,000th chapter, series creator Eiichiro Oda penned a heartwarming letter thanking fans for the almost 25 years of support.

"1000 chapters!! Well, a whole lot has happened in the last 23 years. I have spent half my life publishing One Piece weekly. Luffy has taken voyages to many islands and had tons of adventures. I don't know how many people he has met! Likewise, I have met many people and have been supported by many including my family. I can't give enough thanks to those people,” Oda narrates in the letter.

“Your belief in Luffy has led me to believe in all of you, and that is what allows me to continue drawing exactly the kind of manga I want to draw. So here we are, ready to dip our toes into the final stages of the story. It's taken us a long time to reach one thousand chapters. However, it's because I've completed a thousand chapters that you must believe I'll take us to the end. The story waiting for you will defy expectations! I mean it!!,” Oda promises.

To promote the poll campaign, Shueisha also released two commemorative videos that marks the manga's iconic milestone. Both videos focus on the "We Are One" slogan. Shueisha described the slogan's meaning:

What surprises await us? As countless values and ways of thought converge to create the WORLD TOP 100, which character will emerge as the one and only ichiban? To find out, we'll have to band together.

Or make your voice heard and cast a vote for your favorite One Piece character here.